Posted by benjwoodard on March 23, 2015 in Published Work |No Comments

We’re taking a week off from publishing new work, and instead offer up this short Q&A with Dennis Barone, who wrote the story, “Pass Go and Collect,” featured in Issue 2. Barone is a prolific writer, having published 11 books of prose, 3 books of poetry, and a collection of criticism. In addition, he has edited a wide range of anthologies. His newest book is Sound/Hammer, recently released by Quale Press. He is a Professor of English at the University of Saint Joseph in West Hartford, CT. 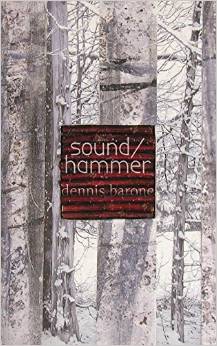 Atlas and Alice: Your new book is titled, Sound/Hammer, and it is split into two sections: “Sound,” which is poetry; and “Hammer,” which is prose. I’m curious as to the relationships of these section titles and the material within.

Dennis Barone: The significance of the terms could, to some extent, be up to the reader. I always thought my main concern in writing poetry was the sound of words, the musical quality, not so much the meaning. Of course, I was always interested in meaning, too, but sound was the primary concern.

As for “Hammer,” I guess the heavy texts, the blocks of prose, hammer the message in more. That’s one way of looking at it. But I’ve also had titles with a slash between two words before. In America/Trattabili, the slash is meant to question the fact that America isn’t negotiable. That’s what “trattabili” means in Italian: controllable. And then there’s Forms/Froms, the first book I published with a spine, which came out in 1986.

A&A: The concept behind Atlas and Alice is to present works that blur genres and that aim to combine different methods of writing to create something new and interesting. You tend to do this all the time in your writing, producing prose, experimental fiction, experimental poetry, traditional poetry, and essays. How do you go about crafting some of this work? What makes you decide to take an idea in one direction?

DB: I’ve always been interested in the relationship between, and the boundary between, poetry and prose. Oftentimes it seems to me pretty much arbitrary, especially with much of what’s published today. I always want to write prose that’s poetic, but never poetry that was prosaic. But that’s not always true, because several pieces in Sound/Hammer that are presented as fiction do tell a story, if sometimes in a roundabout way, while others, like “The Mind of Ideas,” which is language without a narrative at all.

A couple of the pieces in the book I wrote back in college. There’s one, “Pick a Man, Any,” which has a voice that kind of sounds like colloquial American literature, from that time. And “Modern Aesthetics,” about a young man buying tires, I originally wrote in college. These both seemed to fit in the book, so I added them in.

Maybe 15 years ago, I was on a panel talking about poetry and prose with Brian Johnson and Kazim Ali, who has a press called Nightboat Books. I brought to the event Lyn Hejinian’s My Life and James Laughlin’s Byways. Laughlin presents his work as lineated poetry, but he’s really just telling folksy stories about William Carlos Williams, or his aunt in Norfolk, Connecticut. Meanwhile, Hejinian’s My Life is presented as prose paragraphs. 45 sentences each, I think, because she wrote it when she was 45 years old. Now, to me, her work sounds more musical and poetic, yet it’s a block of prose. So I think this is interesting.

We can ask: why is certain poetry broken up in these stanzas? I think for some people, they’re imitating a poet like Wallace Stevens, but without the musicality of language he had. Why quatrains? Why couplets? The decision seems arbitrary.

On the back cover of my book, Separate Objects, there’s a quote from Robert Venturi that talks about the idea of a “messy vitality”: “Better a messy vitality than an easy unity.” And so I think of my collected writing as having a messy vitality. Everything has a reason.

A&A: Has Italy become a muse at all with your writing? There’s quite a bit of Italy in the new book, as well as your more recent writings.

DB: I’ve always mixed my scholarly work with my artistic work. It’s hard to keep them separated. When I was younger, in my book The Returns, I wrote a lot about 18th century American Literature. The longest story in that book is about an unnamed city, which is pretty clearly Philadelphia, and in my mind it takes place around 1810. And from there I was taking this setting from someone like Edgar Allan Poe, who I was reading at the time.

I’ve now been writing a book about Italian immigrants and religion for about 10 years, so there’s quite a bit from Italy that makes its way into Sound/Hammer. Some of it is meant to be funny, and in others, I’ve interspersed these translations, which are both accurate and reinterpreted.

Robert Lowell had this book many years ago called Imitations, where he created adaptations of poems. It’s something different to call your own work a direct translation. I recently read some translations where an author took a 6 line poem and made it 14 lines long, which could be fine, but he called it a translation. He should have called it an imitation, like Lowell.

So, yes, Italy is in this book. But there are also lots of poems about Connecticut, too. The first fiction piece in the book, based in Italy, was actually written from the gallery at the University of Saint Joseph (in West Hartford, CT). There was an exhibit of prints: Italian-inspired scenes. So the story is a mix of images from these pieces of art. But I have been to the church mentioned in the story.

“Salute!” is clearly about Italy, too, in this modern idea that Italy should only be for the Italians. This piece has the characters of Debbie and Dennis. Someone who knows me knows that I’m married to Debbie, but we’ve never been to the town in the story. It’s all made up. I don’t know if the mayor of this town is a Fascist or not.

A&A: So, with this bleed between your research and your fiction and poetry, what draws your interest the most?

DB: I remember once hearing Philip Glass give a talk where he said he always tries to have something in conception, something in production, something in progress, and something in post-production at all times. So I try to do the same. Right now, I have this new book and I’m finishing my book on Italian immigrants and religion. Some anthology work came from pitching one idea and having a publisher propose something else instead. Most of the time, one thing leads to another. This book on Italian religion has a fiction fragment in it, and there’s also a short poem. I’m also a character in it, which seems OK to the publisher.

I write short essays for The Hartford Courant, and one of those ended up in Sound/Hammer, too. I just thought it fit in with the overall theme, with the overall diction. I hope it lends itself to creating the “messy vitality” I mentioned earlier. I hope to create something between each piece in a book. So I place one that’s very abstract next to another that is very concrete.

A&A: You’ve recently turned 60, and the story we published in A&A, “Pass Go and Collect,” while fictional, contained a slight autobiographical element, as you, like your character, had open-heart surgery two years ago. Do age milestones and physical traumas like your surgery influence your writing, or make you think about your methods any differently?

DB: This new book was originally called, Memoir/Biography, but my publisher didn’t like the title. I actually think it worked out well, as I like this title much better. Nonetheless, there’s always certain autobiographical elements in here, mixed in with the imagined. In the poem, “The Balcony,” my name is mentioned in the first line, and it’s basically all true.

A&A: Do you find yourself writing about new subjects as you’ve aged? Or seeing things in new ways?

DB: I can still identify similar thematic ideas. One of the things I always liked about the author Charles Brockden Brown was his idea of the instability of human reason, which is what his most famous novel, Wieland, is all about. I’ve always been interested in how easily we can all be deceived, the limitations of human knowledge. So those interests are still with me.

I don’t know if I write in the same style anymore. I once, a long time ago, wrote a very long piece, almost 80 pages. I couldn’t do that again. It would be too repetitious.