Posted by benjwoodard on May 28, 2018 in Published Work |8 Comments 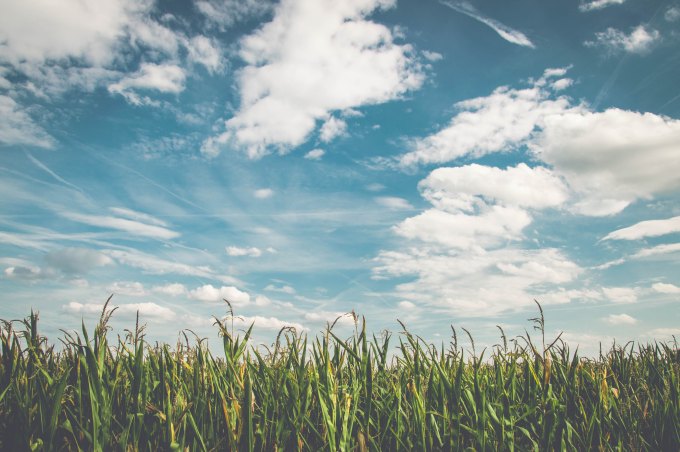 Makes sense Iowa feels home to me. Crop plats so large you drive a mile, and the spread keeps going. They say South Dakota’s are even bigger, some five or seven miles square. But Indiana where you were raised? I’m not sure; I’ve never been there.

My paternal grandpa’s piddly seven acres behind the old Illinois homestead, with a kitchen pump handle and no other plumbing, grew corn. The John Deere tractor’s flywheel took all that three-hundred-pound man could give it before the characteristic pop pop popping began. But he didn’t work those rows for nothing; his payout was mealtime when he ate and ate and ate. Half a dozen eggs, half a pound of bacon for breakfast. Sausage gravy and biscuits some days. Roast and potatoes, supper. Fried chicken. Corn on the cob. And homemade pies tasty as anything you ever had. The crank on the ice cream maker hardened along with the ice cream when the rock-salted ice started melting in earnest. We lived a block away.

This was our growing-up, the one you missed, the land and seasons, the old-timey meals and the Hicksville blood running agrestic, green, and good. This was Dad’s family. Mine. You had another family raise you—to call your own—but we have always been sisters, even after you died too young.

But our strange breed also had a German mother, yours and mine, as European as they get, strange indeed when you realize we settled smack in the middle of a provincial Midwest. Mother, lover of all things wurst: knockwurst, liverwurst, bierwurst. Maker of spaetzle and dumplings, red cabbage and rouladen. A small cold beer with each dinner meal.

The palate learned diversity that way, tongue split along the lines of Bavarian and backwoods. I took a twenty years’ hiatus from that lineage to experience urbanity, discovered fine restaurants hold charm, hefty prices, and unique savor-jumpers, but even so, those memories of youth hover hard, and I’ve never junked the urge for home-cooked meals.

In my own kitchen, I fumble, knowledge, a lost vision in the presence of such worthy childhood ghosts. The acumen, I have, but lacking is desire, except the desire to be a child again alongside Mutti’s counter, watching her make Bavarian Zwetschgenkuchen, fresh plum cake, attuning my ears to her lovely throaty phrases, hearing an old German polka record spinning on the turntable. Or in Illinois Grandma’s cold winter / hot summer home where I felt secure, ran free and feral, where her third-grade education and stories of working in the humid Arkansas cottonfields at age eleven gave rise to imagination and family strength and a can-do spirit of endurance still bound tightly to our pith in the face of each new adversity.

Corn is browning up here in Iowa now, Sister, cobs hang near-ready on every stalk. This is cattle feed, corn sweeteners, and ethanol. Soybeans too will feed the livestock. We won’t rabbit trail the herbicide and pesticide fiasco, that long and winding road to a sterile future.

Gardens are big and neighbors share with each other, and somewhere beside these lanes a pumpkin pie has just been taken out of the oven.

I can’t tell you how long these fields or how high the sky above them. I can’t tell you how often we visit a grocery store (often). But just as often, I can’t tell you how many glass jars of pickles, tomatoes, beets, and jellies have been put up along these rural routes. Or how many freezers labor under now-frozen berries picked from our own bushes and plants, how many animals have been taken to a meat market every small country town seems to provide. I can only talk about an independence bred and bred so deeply it sprouts without water and thrives without sun. This hopeless autonomy, we’ve learned to live with, just as we once learned to wrangle metropolitan traffic, and just like those who move here seldom move away, turn green with the pastures in spring, and ochre, come fall.

I’ll tell you more one day, and one day we’ll meet in a place far away from these clarion skies and countless hills. Like the land and stars become us, too the living, the meals, the memories. We’re all wrapped up in this lyric, blanketed in this kismet called rural. But that doesn’t mean I don’t think of you.
.

German-born Chila Woychik has bylines in Cimarron, Portland Review (online), Silk Road, Stonecoast, and others. She won the 2017 Loren Eiseley Creative Nonfiction Award & the 2016 Linda Julian Creative Nonfiction Award. She is the founding editor at Eastern Iowa Review and has finished an essay collection she hopes to get published one day soon. www.chilawoychik.com