Nonfiction and Art from Natalie Vestin

Posted by benjwoodard on February 25, 2019 in Published Work |No Comments 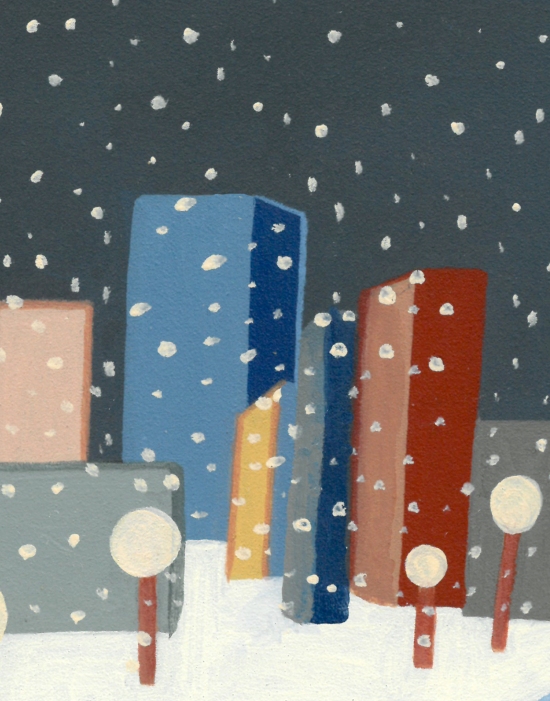 “There is always a split between fragments that are real and fragments that are virtual, between memory and fantasy. These splits have no existence other than being the passage from one fragment to another. They are relays rather than signs. They are traces. They are in-between.” Bernard Tschumi from Architecture and Dysjunction

One September I didn’t sleep for almost a month. That’s when I saw the dogs. Real dogs who made an alternative sleep as I walked around muddled with the desire to bury my face in their fur. Like the heat that hovers at the corner of your lips when you’re just about to fall asleep. That kind of want, that gift, a kiss to the side of your mouth when you’re the only one around.

The sleepscape dogs, the candy dogs, now whelped and set free by me on canvas.

I mixed my rosemaling pigments: forest-floor green, oxblood, the fleshy pink between sanguine and cadaver. Winter sky blue—grey and lavender—toned to make a boreal teal. Darkness, earth, muscle. Home: ochre toned and made the opaque sadness of its sunshine wish. The sleepscape dogs bridged home and the city, a mirror equation next to the balance of sleep and waking.

The sleepscape: not a landscape in which most are sleeping, but a transient world formed by many sleeping bodies in close proximity. Seen best on a dark winter morning when you can gaze at anything straight-on. Where sleep also means the sleeping body is here. Insomnia doesn’t mean sleep is elusive, but that the insomniac has been abandoned half-elsewhere. Where here means the colors that recall my woodland home to me. The bruised sky moving snow from the west. Sleepscape gathering, hot chocolate heated in large tin pots.

So much of looking, painting, and writing is talking myself into something. That it is ok to be here, that here everything is right if considered for long enough to see what might be there. Safe safe safe, only awash in what’s here.

Imagine a candy dog holding back the awake world in its jaws so you can clearly see and be within the sleepscape, summon different worlds atop and against one another with your gaze to see what vanishes, what is brought into being. Every day, every second. The dogs hold back the tides of the awake world, and as light starts to hem the horizon, the lines release like a suspension bridge snapping, recoiling, further into the day. The dogs of the night hold the lines taut, sleepscape as much a barricade as a creation.

In winter, the same path walked again and again where the darkness is allowed to fall. The distance of the light. Offices, most of them empty. On a summer afternoon, they’ll reflect the passing clouds, the same skyscape made unrelated in fragments. 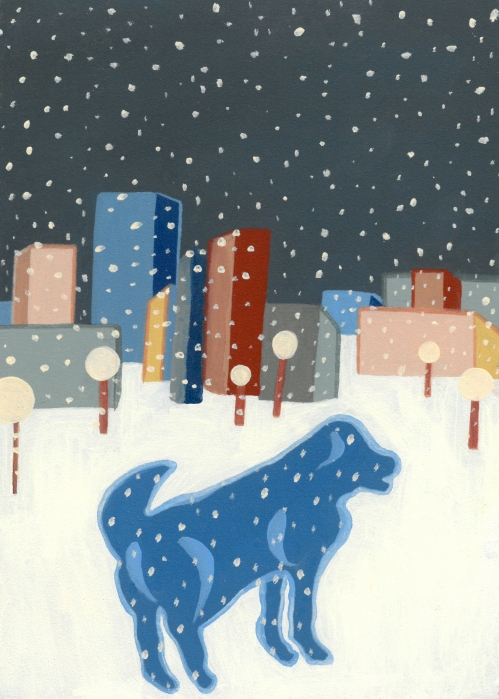 Early dusk, air taut and sad as a cello string. Empty and mourning at once. The romance of it: thighs round and strong on the packed snow, pain implicit in the dry cold and your own pain reflected back at you in the eyes of others. Bare concrete and asphalt expanses of parking lots, parks, hillsides. What is a public space without people? Barren, a shuttering.

What you can see, feel, learn, in the dark, in the bare cold excess of the sleepscape. What you can learn by cultivating what’s deeply romantic in the loneliness of watching a world destroy and rebuild itself again and again.

I am telling you: it is not the same, day after day, minute after minute. Stand in the right place at the right time when the light is changing and with it, the shape of the world. Winter dusk broken by the still lights on the high bridge. The sleepscape prepares itself.

Away, aweigh. Horizon and sunset deeper from the alley, a lesson in standing in the V of perspective and looking toward the vanishing point. When I tell my parents I’ve arrived safely, I say I’m here and not I’m home. Not all places are here. Some are bridges between two heres and gone in a flash. But before they’re gone, they’re revealed to anyone open enough to see them.

My mom boarded dogs for the Humane Society during the time I was growing up. She housed them in our house and our barn, and later, in kennels my father made of wood and insulation and hay cut from our fields. When the kennels were ready to be homes, my father squatted in front of them, proud and smiling, and my mother took a picture. It was my favorite photo of him. Five years later, I tore it up after an argument. As if tearing it meant I refused to accept that people can be kind and cruel and everything else, that I could reduce him to a single dimension through one choice and one act.

And later, taping it back together, the regret not that I’d ruined this one photo that existed nowhere else, but that I’d deliberately erased the good in him that came through in it, that I could choose how much of the world and people I welcomed, and that blotting any of it out was easy.

In painting the sleepscapes, these scenes that have fixed themselves in place with their snow and candy dogs, I realize there exists some relation between sleep and awake and home and away.

When learning a new language: I am from…, but I live in….

Relation in the here and away, in the overlap. Dala horses from family, now passed, stand throughout my parents’ house and my small apartment. Good fortune, but only one per room, my dad warns, don’t get carried away. Don’t tempt fate by being desperate for something different.

The candy fjord horse form, red oxide and bare or with the rippling brushstrokes that mimic saddle and bridle, flicking ears. A candy form to bridge the world of what is and what’s wished for. Not so much to protect a space as to acknowledge that there are other spaces, and if there are others, there are intermediaries to draw your gaze and give it somewhere to rest.

North down Wacouta from Mears Park, sleet suffusing the air so deeply it becomes nearly a memory as it falls. It has never stopped snowing; it will never stop snowing. The church, the lampposts. Ghost signs, windowless granite and sandstone facades.

And why here? Walking quickly to meet friends for fish and cider. Why does sleepscape appear? Why does the scene fix itself, stop for a moment at this time in this alignment? I’m worried and wet. I want to be home and not here.

The last time I stopped being able to sleep, my mom was suffering under clouds of sepsis unleashed throughout her body, unsafe and awash. I felt her in the way mice may feel each other’s pain in the crepuscular hours when the light reveals the world stepping out of its skin to become different in the course of a day, in the way that my mother and her mother would tell each other their dreams and find them the same night after night. 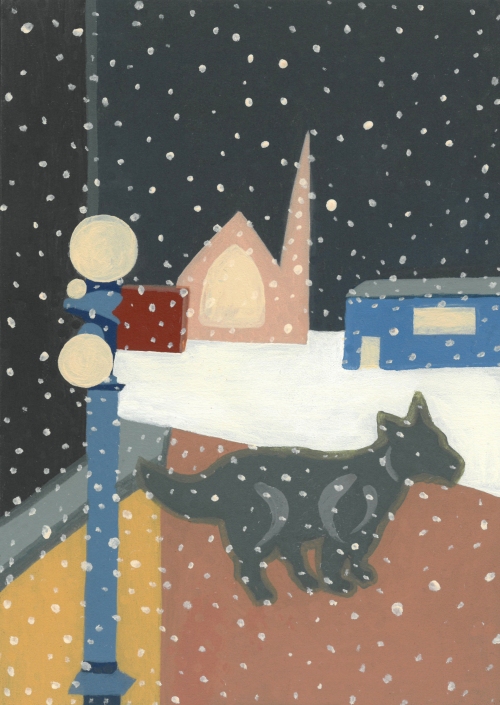 When surgeons removed my mom’s infected colon, I slept for the first time in weeks. My sister and I wondered to each other if her abdomen was now empty. I pictured the darkness of outer space we pretend to have seen and photographed, like we all think we’ve seen the Milky Way in its entirety. Violet dust, stars in a scatter, pink nebulae.

Can you live somewhere—sleep there—without being all of the pasts it has buried or built over? All the overlap? All the dogs you’ve ever known?

The insomniac’s sleepiness: a softening, though not at first. At first, a dread and inability to fit body to world, trapped in the doorway between sleepscape and awake unraveling from the candy dogs’ jaws. Not here entirely, but awash. Once I woke from a nightmare, veins in my ankles dilating sour. Safe safe safe awash. I stopped my futile dream-running, and I stood in the waterfall doorway between the worlds of sleep and awake and let it pour over me. Awash in it all, but not belonging. Not here fully. Imprint, canvas.

The shape of a leg, that pork chop curve, the way the foot hits the snow. Learning by painting another’s joints, a body’s articulations, its convexities and spirals. The realization that all dogs are listening when painted in ancestral colors.

Through the day, the afternoon, when the awake world coils its cords around and inside you, the only remedy for it is the canine comfort of burying your closed eyes in semblance of sleep. Later, when insomnia builds on itself like a city that was once woodland and is only waiting to show you how its displaced woodland life can murmur into your oblivious skin, there is a softening of the space in your insomniac middle, a warmth that spreads.

Daze, muddle, hot sting at the edge of vision and horizon, like your life is a dream your family is having at once. Clouds like falcons ride the ghosts of currents, prickle at the periphery of deep blue sky. 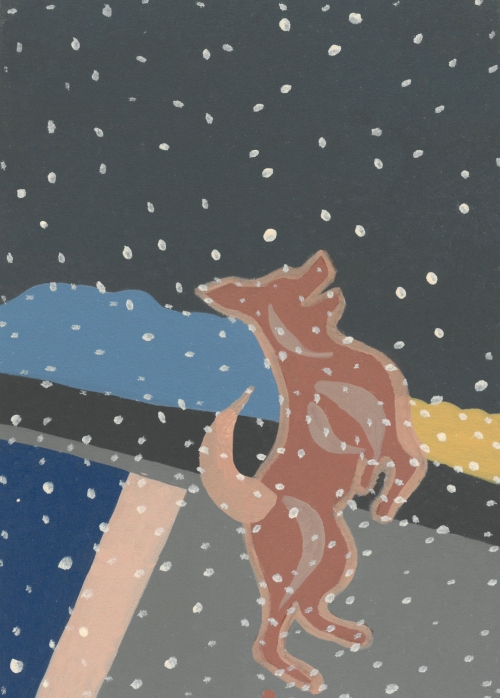 Natalie Vestin is a writer from Saint Paul, Minnesota. She is the author of Gomorrah, Baby (Anchor & Plume, 2017) and Shine a light, the light won’t pass (MIEL, 2015). Her essays have appeared in Territory, The Normal School, Prairie Schooner, and elsewhere. She works in infectious disease research at the University of Minnesota.