Posted by benjwoodard on October 28, 2019 in Published Work |No Comments 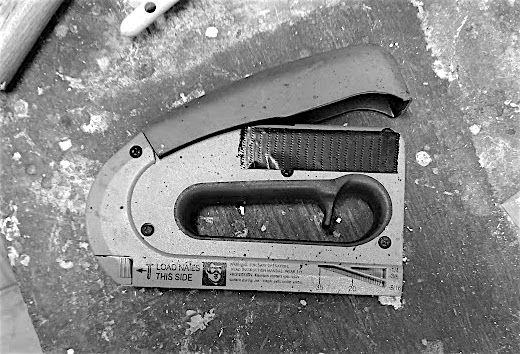 A Hand on My Shoulder

I am the girl with a hand on my shoulder. I don’t mean like a leg on a foot, which is just another way of saying “a foot at the end of a leg”. I don’t mean the hand of comfort, or an ally, I mean a hand, literally, a solid piece of bone wrapped in pink skin. It is a flesh and bloodless hand stapled to the top of my shoulder. There are still fragments of scab clinging to the puncture holes. The strands are lying there, like Juliet on her Romeo in death. I believe the nerves are dead now, which prohibits me from turning it or pointing with it, but the nails continue to grow, which I understand happens to the dead.

The hand on my shoulder seems bound for the sky. Like the hand of God from my childhood book of saints, the fingers are slightly bent and beckoning. I think they look like the fingers of a ballerina who uses her hands with grace, or, in this case, just her left hand.

I was put in the hospital for a while, first because I was bleeding so much, then later I was moved to a psychiatric hospital. The doctors assumed I had removed the limb because I wanted to kill myself, but I had simply meant to transplant it elsewhere; I wasn’t trying to get rid of it. I did not want to commit suicide.

They say I would’ve died of blood loss if Josh hadn’t found me. He remembered about tourniquets from his childhood Boy Scout days, but my apartment isn’t scattered with perfectly ripped ribbons of white gauze, like the ones shown in the Boy Scout manual. First, he tried to rip up his shirt. He took it off and I looked at the tangle of blonde fuzz on his chest that rose meagerly to his neck only to get cut off at the throat. He was shaking with fear and had goose-bumps from the adrenaline I’ve always sent running madly through his veins.

When he saw me staring at him, I think for a moment he thought my eyes were stony in death, so he put his shirt back on, hiding his nipples and pillow belly. But when he noticed I was not dead he grabbed the wide rubber bands that I save from the morning papers and began putting them around the stump by lifting the end of my arm delicately, holding it with only his thumb and forefinger. He avoided getting blood on himself by stretching the elastic band considerably wider than necessary, then letting it snap around the bone before he dropped my wrist. The bleeding stopped right away, but I was feeling faint and Josh thought he should call someone.

One night last year, before Josh told me he needed some space, we were sitting on the floor eating pretzels and watching NOVA. We saw a show on TV about the reattaching of fingers and toes, and in one case, an ear.  He must have remembered it because he put my hand in a plastic bag (the hand lying on the floor, not the one attached to my arm). He didn’t touch the dissected hand with his bare fingers.  He used the plastic bag reversed around his palm, then pulled the baggie around the dismembered limb, the same way I do when I’m picking up the dog’s shit.

I have heard of phantom pain, the pain that amputees feel in a leg or arm that no longer exists, but I didn’t feel pain at all. I knew I could still control the hand with my mind, that when he lifted the bag close to his face, I could make my detached appendage reach out and touch him. As he concentrated on not vomiting, I could see my separated hand struggling against the walls of the bag. I only wanted to run its fingers across his lips, where a few pieces of loose white skin flaked. They looked swollen, like he had been hit in the mouth, or was kissing someone too much and for too long.

Josh tried to call 911, but I had cut the telephone wire after I called him. Not because I thought I wouldn’t be able to dial with only one hand, (there are push button phones for people who do not have two hands) but because the phone hadn’t rung for 3 months and I saw no need for it anymore.

As he stood up to run next door for help I watched his legs move inside his pants, the muscles of his thighs releasing the tension of kneeling by my side. Surely he would not be wearing underwear. I know when he got my call, he would have leapt from bed and pulled on whatever garment loitered on the floor.  He was not wearing socks with his shoes, and I could see fine gold hair wrapping itself around his sturdy ankles. Just like my hand would be if it had no body dragging behind it, perhaps if my fingers could circle his ankle bone and hang on, he would ignorantly be carrying a piece of me around with him.

Josh hadn’t noticed the staple gun placed strategically on the floor next to the meat cleaver. Even if he had guessed its purpose, he would not have picked it up. I could tell he didn’t want to touch anything.  Perhaps he was afraid I would try to convince the police that HE was guilty of cutting off my hand, and for that reason he avoided leaving fingerprints anywhere.

After he left I used my teeth and my other hand (thank god I’m right-handed and had been thinking logically enough to cut off the left one) to open the baggie. Those commercials about zip-lock seals are true, they can seal in any food, odors, or limbs and not leak. As I struggled to unseal it the stump of my left arm kept getting in the way as it automatically reached up to assist the right hand. I snapped it with one of the rubber bands to make it behave.

I removed the hand, laid it on the floor, and positioned myself on my back next to it, with my shoulder close to the severed wrist. Then I manipulated the half-dead fingers into the shape I wanted, curved and beckoning like Jesus calling. But I left the digits slightly fixated upwards, so they would point to heaven when I stood up. I wanted them always to be gesturing to the sky and the clouds.

Now that I’m healed, if Josh saw me with the hand perched like an exotic bird on my shoulder, he would remember how he always insisted on making love with me on top. I used to look down upon his swollen lips and grip his tufted chest, while he explained that he liked it that way because, “I can look up and see your face and the blue sky and the clouds framing you. You look like an angel and it feels like I’m in paradise.”

And then he would remember how when the moment of pleasure arrived he would try not to close his eyes.

Christine Offutt regrets the fact that she was a human baby. Her childhood dream of being a cat or a bird dissolved in tears when she was saddled with a 1st grade primer and a brown paper sack containing lunch, then sent to the bus stop for her first day of school. But all was not lost, as reading and writing filled the void that flying and pooping in a litter tray would have fulfilled. Christine’s stories have been published in American Chordata and Jitter Press.