Posted by benjwoodard on September 7, 2020 in Published Work |No Comments 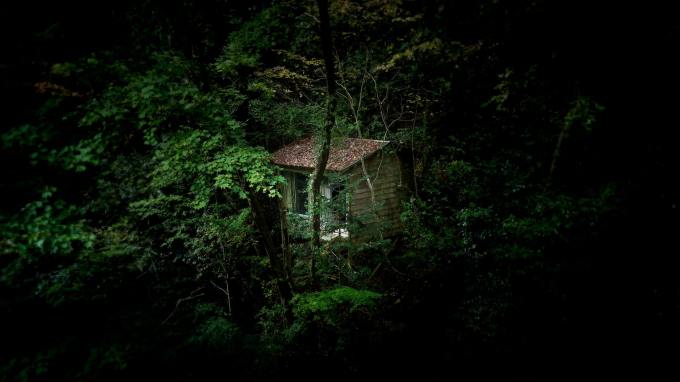 There once was a witch, but nobody ever saw her. She lived deep in the forest and no one knew her story, about the woman who flew from her home, from her forced marriage and motherhood. From her children who clawed their way out of her body as she scrubbed dishes and mended her silent husband’s shirts. Children who squawked for sweets and never swept the hearth.

One day her husband left as he always did, at dawn without a word, his bowl from breakfast on the table, dried mud from his shoes in clumps around his chair. Her children woke up demanding jam and syrup, anything sweet. They played as she toasted their bread over the fire, threw her knitting from room to room, unraveling the stitches as they sang call-and-response:

A girl gave me a kiss one day.

And I, of course, was miffed.

I gave that kiss right back to her.

You see, I don’t take gifts.

She knelt, gathered the yarn, and they ran across the kitchen, jumped over her back, shoving down on her neck and head as she wept. They pushed past each other out the front door, toast with honey in hand, leaving dust clouds in the front yard.

“No,” the woman said to the empty room. She stood up.

“No,” she said again and shrugged off her ragged dress.

She went to her husband’s trunk and found an old shirt, a worn-out pair of trousers. She slipped them both on, folded over the wide waistband until it sat close on her hips, tied the shirt tightly about her waist, then wandered barefoot out of the house.

“Hansel,” she heard her daughter call in the distance. “Let’s snatch a pie from the baker’s window!”

“I’ll race you!” her son laughed and they were gone.

She turned and walked the other way, down the path towards the woods. Into the darkness, past the path’s end, through the trees, their trunks closer and closer together. Sunlight barely filtered through the branches above now, eventually dimming into a perpetual night. She stopped, closed her eyes and breathed in the moss and damp soil.

She wandered until she found a clearing.

Years later, rumors whispered in the leaves of two sobbing children approaching. The witch paused at her gumdrop doorway and listened.

There once was a witch, but not the scary type, she never bothered anyone. Not even her new neighbors, who drank and shouted on their back deck and threw their cigarette butts into her garden. They were so different than the old man who lived there before and kept to himself, occasionally helping her fix her leaky roof or a broken post in her fence.

This couple was different, especially the beautiful woman with her long, golden hair. She sunned herself on a bench every morning, brushing her hair that seemed to grow longer each day, eating boxes of sweets her husband brought back from the bakery in the town center, wrappers dropping from her fingers. The wind blew the little wrinkled plastics in through the witch’s kitchen window sometimes, where they lay on the floor until swept up.

One day the witch was gathering herbs in her garden, the sun hot as the morning lengthened toward noon. She pulled the hood of her cloak up high to shield her eyes, catching a flash of red before she bent back over.

The woman stood at the railing in a short, red silk nightgown, the matching robe hanging open, draping delicately about her newly-rounded stomach.

The witch raised her hand to wave, to offer congratulations, but the woman sneered and turned away, then walked back inside.

That night the woman’s voice carried in through the witch’s open window.

“Have you seen the old crone next door? Like a pig wallowing in shit, grubbing around for beans and cabbages.”

Her husband muttered something, and the woman laughed, an abrasive, nasal trill so at odds with her beauty. It echoed through the witch’s small one-room cottage.

No matter, thought the witch. She stirred the thick brown liquid in the pot, added a sprinkle of dried rose, some crushed willow bark. Ester from down the road had arthritis, was getting worse, her hands pulling into frozen fists. The witch wanted to offer some small bit of relief. Ester’s daughter had begged for something, anything.

The witch wished for a daughter of her own.

“But I don’t want rabbit! I don’t want apples!” The woman next door screeched, surprising the witch into knocking over the pot, spilling the brew.

“No,” the witch said to the empty room.

The witch tried not to listen. She knelt to soak up the mess with her skirt. Now she’d have to start over, all those hours of work for nothing.

“I want cabbage. I need cabbage,” the woman whined and whatever her husband answered enraged her, her voice rising and immediately cutting him down. “BRING ME CABBAGE OR DON’T COME HOME!”

The witch considered her own garden, full of big, ripe heads of cabbage the woman had noticed her grubbing around for. She planned to pick them the next morning. Surely she could part with one?

“Our child better not be a sniveling weakling like you. I’ll toss the little shit in the well and go back home to my parents.”

A door slammed. Through the window the witch saw the man, barely a shadow in the darkness, creeping toward her yard.

Once there was a witch, but really she was a sorceress. Nobody knew, though. They simply thought her a whore.

Nobody said the word “whore,” but it was implied. When the maids brought her tea and slammed down the cup and saucer, burning her outstretched hand. When the guards stood still as she passed, then their laughter followed her around the corner. When her drunk father visited, demanding money, and her husband, the king, refused to allow him entrance to the castle.

Late at night, the king made her slither like a snake at his feet.

“Take off the gown and you’re as dirty as the day I found you,” he said, then smashed her face-down on the cold wood slats to rut. “My first queen was pure as snow.”

Only Snow White, the dead queen’s daughter, treated her with care and deference. They’d walk together around the castle gardens, stitched together in the great hall. She had no memory of her mother, had lost her with her first breath, and longed for the affection her father would never give. The two of them grew a strong bond, both yearning for unnamable things.

The king wanted only an heir.

“You’ll keep yourself beautiful and give me a son—or it’s back to the slums with you, slut,” he whispered every night in her ear.

But the years passed and no son was conceived. The king grew more and more rough in bed, bruising her arms and legs, pulling her hair until the ends cracked and split.

One morning she awoke to a grayish-white streak down the center of her scalp, the hair old before its time, shining silver in its rejection of youth. She rushed to cover it with a silk headscarf before the king could see.

“Mirror, mirror on the wall. Is there anyone uglier, more pathetic than I?” she whispered in her bath chamber, tears pouring down her face, the previous day’s powder crumbling and turning to paste on her cheeks.

The mirror clouded over, then cleared, showing her as an old lady in rags, crouched down in the street. A passerby spit on her without missing a step.

The mirror fogged again, clearing up to show her dancing slowly at a feast, her skin smooth, unblemished, her hair black as night, her stomach round and full. The king’s hand raised with hers as they turned and danced in the opposite direction. He smiled at her and touched her cheek, touched the curve of their unborn child.

“Yes.” But her voice sounded thin, fell dead to the tiled floor.

The mirror fogged once more, then cleared to show her step-daughter, now sixteen and achingly lovely to behold, wearing the dress she wore just yesterday as her father paused to watch her sew. Snow White didn’t notice his lecherous look, was too busy knotting a delicate thread, but everyone else had seen.

“But what has that do with me?” she asked the mirror.

The mirror turned black, then reflected back her own exhausted face. Lines around her eyes deepening. The whites of her eyes veined and yellow. Soon she would be cast aside and they both would be lost.

Hannah Grieco is a writer and advocate in Arlington, VA. She is the cnf editor at JMWW, the fiction editor at Porcupine Literary, and the founder and organizer of the monthly reading series “Readings on the Pike.” Find her online at www.hgrieco.com and on Twitter at @writesloud.