Posted by benjwoodard on March 1, 2021 in Published Work |No Comments 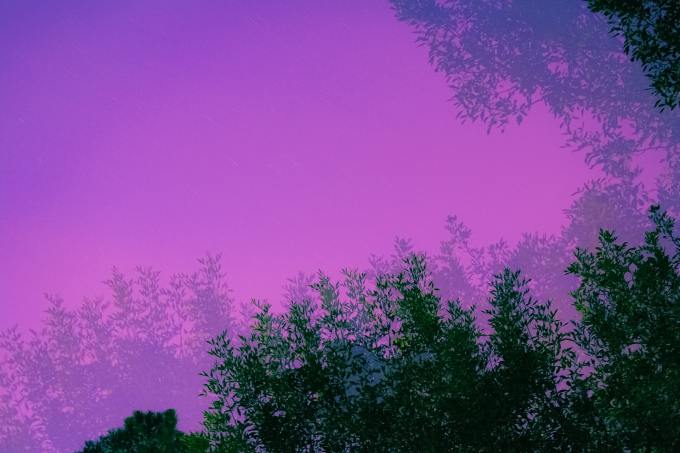 Purple sky at night. We all turn out the light.

I decided to do a thing. Every hour on the hour I’d tell a stranger they’re beautiful. The decision came to me while writing poems in the Greenhouse Cafe. It hasn’t gone well so far.

The first person was a woman, old and white. Mid-seventies, ish. She screamed at me and hit me with her purse until I ran away. Even chased after me for a hot second. No accusation of wrongdoing, no How dare you!, just screaming. Her blotches weren’t even that bad. Purple gashing along the eyes and much of the left side of her face, but it wasn’t terribly saturated. From a distance, you could hardly tell.

The second person, a man in his thirties, well dressed and professional, race unclear, headphones in, said Fuck you. Then he took out his headphones and said Wait? What did you say? I said I said you’re beautiful. He nodded and repeated Fuck you, and kept walking. He was clearly wearing an older version of NeoSkin. His skin was super flaky and you could see the purple through it.

The third person was a young Black woman. She said thanks but she shook her head after she passed by. She was badly affected. I wanted to say to her I mean it! I’m not messing around! You are beautiful! but she was gone before I got the chance. Maybe it would defeat the purpose to scream at people in the streets when I was trying to make them happy.

I walked by a fresh site of a recent immolation demonstration and I was struck by the way the black scorching tattooed the concrete. It was a fairly small chunk of city street, maybe a quarter of a block’s worth. This had been The Fashion School’s second immolation protest. Thirty models set themselves on fire. Cynthia Lloyd was one of them! Crazy to think about. I remember jerking off to her in Chatelaine way back. On the wall of the building in front of the blackened road, someone had spray painted NO MORE T42R!! OUR SKIN IS ON FIRE SO THE WORLD WON’T CHAR??

But then something nice happened. The fourth person I said it to, a woman, maybe 30, race unclear, smiled and said Thank you. It was a real smile. Her blotches were particularly bad, some of the worst I’d seen. Even worse than mine.

You’re welcome, I said. We stood there, not speaking, just smiling, for like a minute.

Do you mean it?

Of course I do.

It made me smile. I hadn’t expected it. She walked on and I watched her go.

On my way home I passed another protest. A slim man, maybe 20, tall, jet black hair, olive skin where he didn’t have blotches, was pouring gasoline on himself. He had about 200 people behind him, cheering him on. I could see that he was absolutely, otherworldly handsome, even from a distance, wearing clothing only a runway model could wear. I turned my head and ran for my life, just before he lit the match. I heard the roar of the crowd, and then, echoing, the chant. Our Skin Is Not Your War! Our Skin Is Not Your War! I ran all the way home.

Back in the apartment, I followed the routine, first adjusting the humidifiers, then applying the creams. I sat still, letting them absorb, thinking about anything I could that didn’t remind of me of stinging, burning, anguish, pain, face, skin. I pretended they might work, like everyone else. Random factoids floated around in my head. A Trivial Pursuit question I’d once read: What did Queen Elizabeth I order removed from the palace when she became old? Mirrors. I imagined those Medieval makeups that contained arsenic and white lead, that burnt parts of people’s faces off and killed others. Those people never worried about global warming. I thought about bleeding—draining your blood to look paler.

I showered. I checked the mail. A letter from the government about another deployment of T42R, two weeks from now. The letter said that this batch would be slightly less concentrated than the previous ones. It was written to suggest that this was a good thing, but it wouldn’t change anything. The chemical had a cumulative effect. At least that’s what we had been told in the past. Nobody knew what was true.

I woke up in the morning with dried blood on my pillow, as per usual. I looked outside at the deep violet sky. I still hadn’t gotten used to it. I checked my apartment door—they had actually delivered the newspaper today. The headlines were positive, about how we were already seeing a slight drop in global temperatures because of T42R, because of what it was doing to the world’s atmosphere, because, because, because. It was the same story, repurposed, every day. The odd story here and there about protests were hidden at the back. Usually they weren’t published at all. None in today’s paper. There was an ad featuring Gwyneth Paltrow with a blotchy face. The quote above her head said This affects us all – Speak out. Protest. Resist. Global Warming is not the only issue that matters. I looked at her; she was still pristine. Beautiful, I guess, in the Hollywood sense. I thought about what that word meant. If I saw her on the street, I would tell her she was beautiful. I wondered what she would say to me. I wondered why the newspaper ran the ad. I guess if you have money, anything goes.

I applied my creams, waited, showered, applied my outside ointments, got dressed, and went to the Greenhouse Cafe to write poetry. I had been there for an hour when someone caught my eye. It was the girl from yesterday, the one that told me I was beautiful back. I waved at her. I never did stuff like that, waving at people, but then again, I never used to tell strangers they were beautiful either. Maybe I wasn’t in control of my own body. She saw me and smiled so wide my heart skipped a beat. Then she came over and sat with me. We made small talk. I told her my name, she told me hers. She said she was a painter, but during the day she worked in human resources for an insurance company. I told her I liked that she led with the painter detail, instead of what she did for a living, and she asked why wouldn’t she? She told me I seemed anxious, and I told her that all people seemed anxious. She was genuinely perplexed. She did not agree. She said I should be careful about telling strangers things about how they look, that I might get hurt, or worse. I said I thought she liked it. She did, but she’s not everyone.

She asked me what I thought of T42R. I wasn’t sure what she meant, but I guessed. I said I wasn’t sure. In the grand scheme, of course it seemed like a good thing. According to the news, it was actually working to slow down global temperature rise, and frankly I liked what it did to the atmosphere, the new colors in our sky. But, well, I didn’t like looking like this. No one did. She said she understood. She didn’t quite bring herself to say that she also didn’t like what it did to her face. I had the impression that she didn’t care much. Interesting thing, a painter who doesn’t care about the aesthetic. I heard myself think that, and it was a dumb thought. She said the recent rash of suicide protests were very scary. I said I agreed.

We sat in silence for a while; I wrote my poems while she sketched in her notebook. I looked down and saw that she was sketching me. She recreated my blotches accurately, but, somehow, I looked really pretty in the sketch. I don’t know how she did it, but she made my face beautiful. I told her that. She looked at me and said It wasn’t hard.

That night, I stared at the purple sky from my bed as the crazy red sun was setting. I held the sketch of me in my hand. She had written her phone number on it. I told her I would call her, but after I looked in the mirror for a while, I ripped the sketch into a bunch of pieces and threw it in my little trash bin. I slept until 3 in the morning and woke from troubled breathing. That had been happening the last few weeks. Some people said it was T42R. Since I couldn’t sleep, I stared at the trash bin, at the crumpled paper, and wondered if I could piece it back together. I wrote poems from my bed. I wrote until the purple sun started to come out. I stared at my trash bin. Through the crumpled, ripped paper I could see my own face.
.

.
Derek Fisher is a writer from Toronto, where he also teaches English at Seneca College, and bartends. Look for his recent publications in The Write Launch, HASH Journal, and Shudder’s blog The Bite.